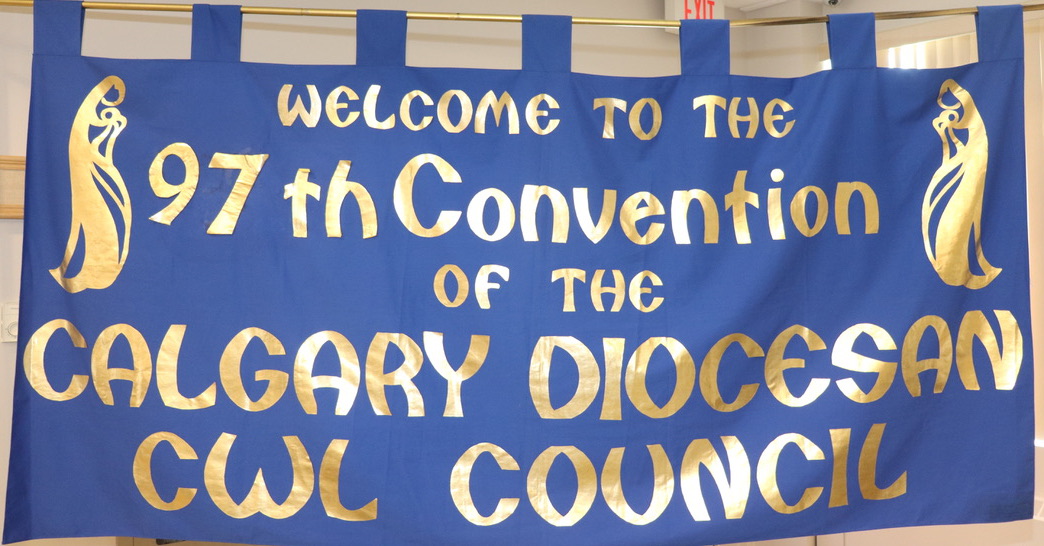 Medicine Hat Region hosted the 97th Annual Catholic Women's League Convention for the Calgary Diocese on May 3rd, 4th and 5th, 2019 in beautiful Holy Family Parish with the theme of Care for our Common Home.

170 members, Spiritual Advisors and guests were present on Friday.

Our first speaker on Friday morning was Father Cristino Bouvette who spoke on "Did the Devil Make Me Do it?: Discerning issues of mental health in the light of faith and the supernatural".

171 people, including 99 delegates, were  present on Saturday. We began with the Memorial Service for Deceased Members who have gone before us. In our hearts, let us thank God for the gifts they shared with us.

His Excellency Most Reverend Bishop W. T. McGrattan spoke on "Care for our Common Home - the Church at this Time", specifically in relation to sexual abuse in the church.

We received information about the preparations for the 2019 National Convention, and 2018 annual reports from our Diocesan officers and Regional Chairs. See the 97th Convention Greetings and 2018 Annual Reports Booklet 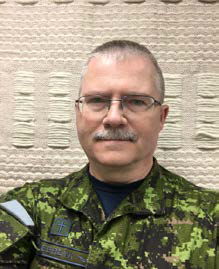 Capt. Rev Gerald Van Smeerdyk is an ordained Minister of the the Christian Reformed Church and has served as Chaplain to the Canadian Armed Forces since February 2008. He served as associate pastor to churches in Michigan and California and as Senior Pastor to churches in Southern and North Western Ontario. As military chaplain, he has served in Ottawa, Edmonton and Suffield. He has deployed in support of military exercises and domestic operations on the prairies and in the far North, and has deployed overseas in support of international operations.
Gerald and his wife Cora have been married for 38 years and live in Redcliff, Alberta. They raised 4 children, Jessica, Nathan, Steven and Crystal (Nathan and Crystal are deceased) and have 3 granddaughters. Having decades of experience in serving ill, injured and dying parishioners and military personnel, and having recovered from PTSD and severe physical injuries himself, Gerald has a passion for providing pastoral care alongside of the clinical care provided by physicians and mental health care workers.

The 4 dimensions of wellness are intertwined and inseparable. 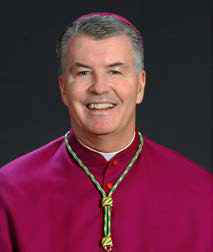 His Excellency Most Reverend Bishop W. T. McGrattan was born in London, Ontario. His Excellency received his undergraduate degree in Chemical Engineering at the University of Western Ontario, followed by a Master of Divinity from St. Peter’s Seminary in London. Bishop McGrattan was ordained to the priesthood in 1987 for the Diocese of London. Following three years of service with St. Joseph’s Parish in Chatham, Bishop McGrattan continued his studies in theology at the Pontifical Gregorian University in Rome, where he received a Licentiate in Fundamental Moral Theology in 1992. Bishop McGrattan served on the faculty of St. Peter’s Seminary in London as an associate professor, vice-rector, and dean of theology and was appointed as rector of the Seminary in 1997 He was ordained to the episcopate as Auxiliary Bishop of Toronto in 2009 and was appointed as Bishop of Peterborough, Ontario in 2014. His Excellency Most Reverend William McGrattan was installed as the 8th Bishop of Calgary on February 27, 2017.
Bishop McGrattan is a member of the Canadian Conference of Catholic Bishops; the CCCB Executive Committee; the Bishop Liaison for Catholic Health Alliance of Canada CHAC from 2011 to the present; a member of the CCCB Episcopal Commission for Evangelization and Catechesis; and a member of the Western Assembly of Bishops. Bishop McGrattan was the National Spiritual Director of the Catholic Women’s League of Canada CWL from 2013 to 2018 and the Chancellor of St. Mary’s University in Calgary.

He spoke on "Care for our Common Home - the Church at this Time", specifically in relation to sexual abuse in the church. The policies stated in "Protecting Minors" includes vulnerable adults. Bishops need to care for people (being shepherds first, and administrators second); Bishop McGratton makes it a priority to meet personally with those who want to speak with him.

Baltutis: Care for our Common Home

Dr. Peter Baltutis, CWL Chair for Catholic Studies, St. Mary’s University.
Peter began his academic career as a historian, earning a B.A. (honours) and a M.A. in history. His graduate work focused on modern European history, with a focus on nationalism and state formation during the twentieth century. Interested in the role of religion as an agent of social change, he earned a second M.A. in Catholic theology from the University of St. Michael’s College. Combining his overlapping interests in secular history and Catholic theology, Peter earned a Ph.D. in the history of Christianity from the University of St. Michael’s College. His doctoral dissertation was the first historical and theological examination of Development and Peace, the official international development agency of the Canadian Catholic Church (which is currently being prepared for publication). This research broke new ground by studying the impact of Vatican II on Catholic social teaching in Canada, as well as exploring the little-understood role that religious actors play in the development of the Global South.
At St. Mary’s University, Dr. Baltutis teaches courses in Religious Studies that include: Introduction to Catholicism; the History of Christianity; Vatican II; a Community Service-Learning course in Catholic Social Justice; and a travel study course in Rome, Italy on Christian Spirituality. Peter also serves as the President-General of the Canadian Catholic Historical Association (CCHA) and is the CWL Chair for Catholic Studies at St. Mary’s University.

Fr. Bouvette: "Did the Devil Make Me Do It? Father Cristino Bouvette: I was born in 1986 in Medicine Hat, Alberta, to the two most loving people I have ever known. Richard and Serafina Bouvette made as their life’s mission caring for each other and for the two children which they gratefully received from God.

During my twelfth grade at Monsignor McCoy High School in Medicine Hat I began the application process to the Diocese of Calgary, which graciously accepted me as a candidate and sent me to begin formation at St. Peter’s Seminary in London, Ontario. In September 2004, I made the terrifying and difficult move halfway across the country and took up residence in the place I would call home for the next eight years.

I am inspired by the words of a great saint-mentor of mine, Josemaria Escriva, Men need us so much (though many do not realize it) that there will never be a surplus of priests. We need more helping hands, more time, more energy. This is why I often say to my sons who are priests that the day one of them noticed that he had time on his hands, he could be quite sure he had not lived his priesthood well that day.

It is my fervent hope to live the priesthood our Lord has shared with me in a way that will draw many souls to Him.

Father Cristino was ordained to the priesthood by Bishop (Emertus) Frederick Henry on June 22, 2012 along with 3 others. He was appointed Diocesan Vocation Director on July 1, 2017.

Fr Bouvette spoke on "Did the Devil Make Me Do It?: Discerning issues of mental health  in light of faith and the supernatural".  If we do not care for ourselves as the crowning jewels of creation, how can we care for others? Our personal integration and mental / emotional health is important to our ability to deal with issues.

Following are the notes from his power point presentation: