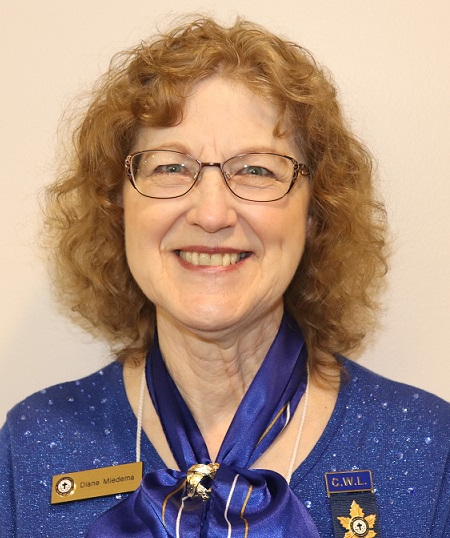 Diane’s early years were spent in a small farming district in Saskatchewan, along with her eight siblings. Her family lived in Revenue and Saskatoon before moving to Lethbridge in 1961. After graduating from Lethbridge College, she worked two years with the Alberta Motor Association; and then 36 with the City of Lethbridge. Before retiring in 2013, she worked as an out-of-school program administrator, advertising coordinator, and insurance and claims analyst.

Diane was raised in a devout Catholic family and two of her four sisters became nuns: Sister Jean (St. Albert) and Sister Edith (Whitehorse). Her mom was an enthusiastic member of St. Patrick’s CWL in Lethbridge; and Sister Jean has served as Spiritual Chair and Secretary of her council.

Diane is a 35-year member of St. Ambrose CWL, Coaldale and served as Treasurer, President (two terms) and Past President. During her years on the executive, she also served as membership administrator; chairperson of Spiritual Development, Communications, and Education & Health; and Registration Chair for the 2016 Diocesan Convention. Diane currently serves as Resolutions Chair; and coordinates initiatives such as the Caring Hearts Team, Adopt-A-Seminarian, prayer shawl ministry, and annual goodwill campaign. She served on Diocesan Council as Resolutions Chair from 2017-2019 and is a member of the Diocesan Resolution Committee.

Diane and husband, Otto were married in 1970 and have been blessed with two children: Justin (Minli) in Delta, BC and Ashley in Lethbridge. She enjoys camping and special visits with their three awesome grandsons: Kaison (11), Carter and Jaden (9).

She serves her parish as Eucharistic Minister, lector, altar server on special occasions, and relief collection counter. She previously taught Sunday School and was chair of Parish Pastoral Council.

Diane tutors English as a second language; and volunteers with the Lethbridge Soup Kitchen and Coaldale Kinettes. In her spare time, she enjoys knitting, reading, yoga, walking and biking.

Diane values her lifelong friendships in the League and looks forward to serving members as Communications Chair. Her goals are to streamline communications, restructure the newsletter, and encourage parish councils to contribute articles for everyone’s enjoyment and benefit.

Calgary 40 Days for Life Kick Off