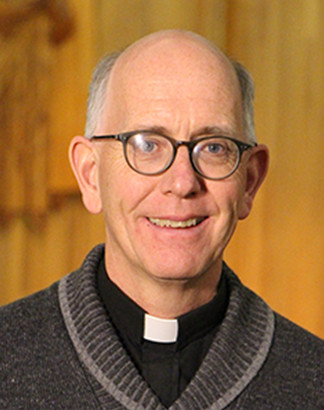 After being an ordained Anglican priest for 24 years, Father Jonathan and his wife, Peggy converted to Roman Catholicism in 2012. He was ordained a Roman Catholic priest by Bishop Emeritus Frederick Henry on May 25, 2013; and appointed as Parochial Vicar of St. Peter's Parish, Calgary in February 2016. Bishop William McGrattan appointed him Spiritual Advisor of the Calgary Diocesan CWL Council in January 2018; and pastor of St. Peter's in August 2018.

Father loves serving the Lord as a priest and takes special delight in preaching and providing spiritual direction. Aside from his priestly vocation, he enjoys hiking, playing piano and spending time with his beloved family and two Bichon Frise dogs.

He is privileged to also live out the vocation of marriage, which gives him a unique perspective on the sacraments as both a husband and priest.

Father Jonathan has learned much about the work of the League in his role of Diocesan Spiritual Advisor, especially after attending conventions. He looks forward to meeting members of the League from across Canada at the National Convention in Calgary, August 18-21, 2019.