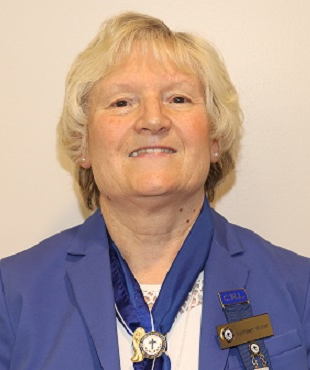 Kathleen was born in Dublin, Ireland. Her father came to Canada in 1957, flying directly to Calgary to find a job. A year later, Kathleen came to Canada with her mom and older brother, Jim; first by train from Dublin to Cobh and then by ship. It took six days to cross the Atlantic Ocean and their ship docked at Montreal in May 1958. From Montreal, they journeyed by train for three days to get to Calgary where she has lived ever since. Her sister, Alice was born in Calgary and has the red hair. There has been a redhead in the family every generation!

Kathleen graduated from Bishop Grandin High School and then attended Hollingshead Business College. She got her first “real” job at Calgary Power where she met her husband, Willis. They have been married 44 years and have two daughters who are both married. They have four grandchildren (3 boys: Zach, Aidan and Ruari, and 1 girl: Gaia) ranging in age from 8-21.

Kathleen and Willis have been members of St. Bonaventure Parish for 44 years and usher at the Sunday 10:30 a.m. Mass. Willis is President of the Knights of Columbus Charitable Foundation.

During their leisure time, they have season tickets to Theatre Calgary and Citadel Theatre in Edmonton. They like traveling, hiking and touring wineries. Last year, they celebrated their anniversary and Kathleen’s birthday on a 38-day cruise from Vancouver to Australia and New Zealand.

Kathleen has been a member of St. Bonaventure CWL since 2004 and has held the positions of Secretary, Circle Leader, Communications and Correspondence, President, Past President; and now serves as Secretary. She was co-chair for the 2013 Diocesan Convention in Calgary.

On Diocesan Council, Kathleen has served as chair of Legislation, Resolutions, Education & Health; and now looks forward to serving as Vice President and Spiritual Development Chair.

GOOD FRIDAY
The Outdoor Way of the Cross CANCELLED